​The Ponca City Concert Series is an all-volunteer, tax exempt, nonprofit organization that has brought quality, affordable musical entertainment to the community since 1935. Roughly 85 percent of membership fees and donations are used to book and present a selection of performers, typically four to five concerts per season. Remaining funds are used to promote memberships and other administrative costs. Acts are chosen and funds expended by a volunteer board of directors serving three year terms. Approximately a third of the board is elected every year. Everyone enrolled as a series member is eligible to vote for and to serve as directors.

A fiscal model based on subscriptions has been the key to continued success during both economic upturns and downturns. Rather than taking the financial risk of meeting performers' contracts by selling an unknown number of tickets at the door, concert admission is by membership only. Enrolling members near the conclusion of one season sets the artist budget for the next season. Advanced funding also helps control pricing, which is typically less than a third the cost of a ticket for similar acts at other venues.

Generous contributions from members also help keep subscriptions affordable. Membership fees support three to four of the four to five concerts that make a typical season. Optional donations by members finance a another concert. Such backing by members means the organization does not need to make impassioned pleas to local merchants for program ads or sponsorships. That said, donations and matching grants from local businesses are much appreciated and help sustain our mission. A list of donors is included on the schedule of acts that accompanies the membership cards. 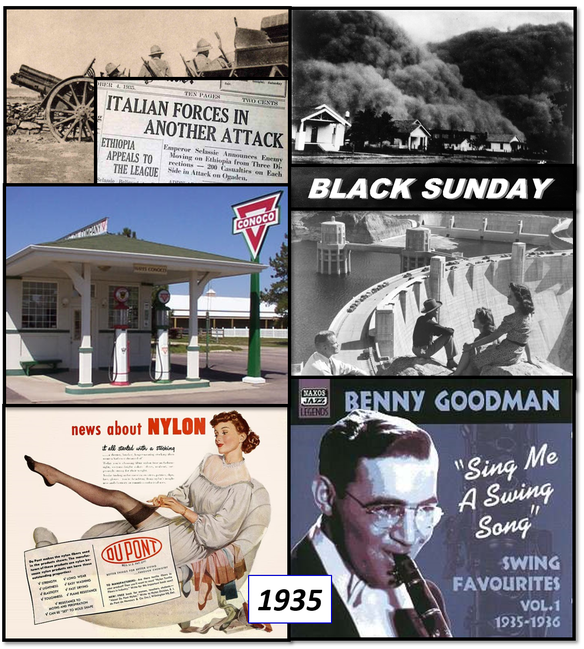 ​In 1935, the world was suffering from the Great Depression, and dictators were arming for World War II which was soon to follow. In the US, the plains states were in the midst of the Dust Bowl. However, all was not dire. Roosevelt's New Deal, supported by Oklahoma governor Marland, was underway, with Boulder (now Hoover) Dam completed that year. Continental Oil Company, headquartered in Ponca City, saw record gasoline sales under the tight-fisted leadership of Dan Moran. DuPont introduced nylon, and Benny Goodman developed Swing.

​1935 was also the year a group of Ponca City citizens formed a Community Concert Association affiliated with Columbia Artists. Radio was a popular source of musical entertainment, but the Community Concert concept provided live performances at reasonable costs to small communities across the nation, and guaranteed jobs for musical artists.

​Performers supported by Columbia Artists ranged from classical to popular, and many up-and-coming artists went on to become world famous. The pictures show some of the artists brought to Ponca City by the association in past years.  More recent acts have included Daniel Rodriquez, a.k.a. the "Singing Policeman' and Melinda Doolittle, an American Idol finalist.
Concerts have been held in several locations throughout our long history, including the old Civic Auditorium, East Junior High, and Hutchins Memorial Auditorium. Ponca City Concert Series is now proud to support the historic Poncan Theatre through rental arrangements for our concerts.

​In 1997, Columbia Artists spun off its Community Concert business, which changed hands again soon after becoming independent. That organization became insolvent in 2002. A new company, Live On Stage, was formed to fill the need, and is now the primary booking agent for our group. To avoid trademark issues, the Ponca City Community Concert Association changed its name to Ponca City Concert Series at that time.

​To some extent, the economic health of the Ponca City area is reflected in membership numbers. We had over 900 members for the 2009-2010 season. A slow yearly decline lead to a low of just under 600 members for the 2015-16 season. Membership was back up over 600 for 2016-2017.  Part of both the decline and anticipated recovery in membership is also due to changing Ponca City demographics, Recent experience with membership booths at other events has shown that there are people in the community unaware of the organization. Therefore, the board has taken various steps to improve communication: this website is one of those.